Christians in Europe are increasingly victims of discrimination

(Bonn, 17.12.2020) On December 9, 2020, the International Society for Human Rights (ISHR) and the World Evangelical Alliance (WEA) presented the 2020 Yearbooks “Religious Freedom” and “Persecution and Discrimination against Christians” at a Video press conference. 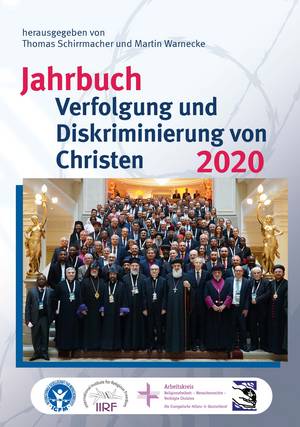 Every year since 2014, the two yearbooks have documented the increasing oppression of Christians and religious freedom worldwide. As the most comprehensive German-language publications on this topic, they serve as decision-making aids for numerous politicians and political parties. Both yearbooks are published by the International Society for Human Rights, the International Institute for Religious Freedom (IIRF) and the working groups on religious freedom of the three German-speaking alliances, the German Evangelical Alliance (DEA), the Austrian Evangelical Alliance (ÖEA) and the Swiss Evangelical Alliance (SEA).

Martin Lessenthin, Spokesman of the Board of the International Society for Human Rights, writes: “Over the years, these two publications have become the standard works on the subject. They reflect the country knowledge, the profound human rights knowledge as well as the decades of experience of the participating organizations. Through our network, we would like to continue to contribute to the protection of religious freedom worldwide as well as to provide information about religiously persecuted people.”

Discrimination and persecution of Christians increase in Europe

In Europe, discrimination and persecution of Christians is steadily increasing. In German-speaking countries, for example, migrants in particular have to contend with discrimination and marginalization on the basis of religious conviction. This phenomenon is particularly striking on the occasion of conversions. On more than 600 pages, the comprehensive yearbooks illustrate numerous country reports with facts and analyses on the situation of worldwide religious freedom as a central human right.

In German-speaking countries, too, public pressure against Christians is increasingly intensifying: “Christians or Christian values” are becoming “more frequent targets of verbal hostility”. Frequent discrimination against Christians occurs, for example, in media reports about evangelicals, prayer meetings of politicians or the prevention of Christians from holding public positions.

“Religious freedom is a human right. Where religious freedom is restricted or reinterpreted, people must fear for their existence and their lives. Restrictions on religious freedom go hand in hand with restrictions on other civil liberties and civil society institutions. For years, the Yearbook on Religious Freedom has not tired of pointing out these human rights interrelationships,” says Uwe Heimowski, representative of the German Evangelical Alliance e.V. at the seat of the Bundestag and the federal government in Germany.

Religious Freedom is a Human Right for All Worldviews 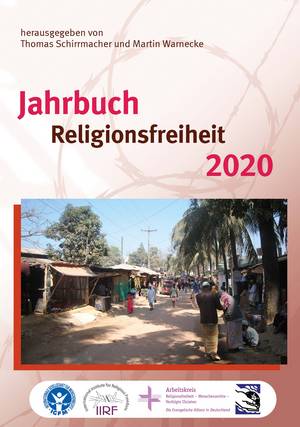 But like freedom of the press, freedom of religion is a human right and therefore must be equally protected. “Human rights are very inter-linked and we must not sort out any right,” said German theologian Thomas Schirrmacher. Schirrmacher cited Turkey as an example: In that country, he said, discrimination against Christians is palpable, but atheists are not safe in the country either.

In the context of religious freedom and human rights, however, it is not only the situation of “persecuted Christians” that is to be improved. The current issue therefore also analyzes the background to the conversion of the Hagia Sophia as a mosque and documents the persecution of the Bahá'ís in Iran, the Sikhs in Afghanis-tan and the Ahmadi in Pakistan.

“For religious freedom, the litmus test is whether one grants the same rights that one demands for one’s own religion and worldview to all other religions and worldviews, or even better, actively advocates for them,” says Thomas Schirrmacher.

The Yearbook Religious Freedom 2020 and the Yearbook on the Persecution of Christians 2020 are bound together in a turning book. Each yearbook begins on one side of the cover. The yearbook has a total of 648 pages and costs 12 euros. 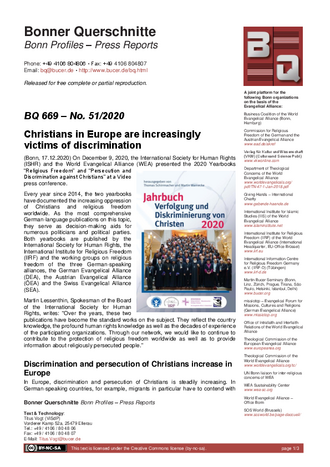