“The Dream That Would Not Die”

(Bonn, 20.06.2022) The World Evangelical Alliance (WEA) pays tribute to Mr. David Morris Howard who served as WEA International Director from 1982 to 1992. The author of ‘The Dream that Would Not Die: The Birth and Growth of the World Evangelical Fellowship 1846–1986’, Howard personified the spirit of the WEA as someone who never gave up on striving to live according to Jesus’ prayer in John 17: that the followers of Christ may be one, so that the world may believe in him. He went to be with the Lord whom he served all his life on Tuesday, May 10 in Fort Myers (FL). 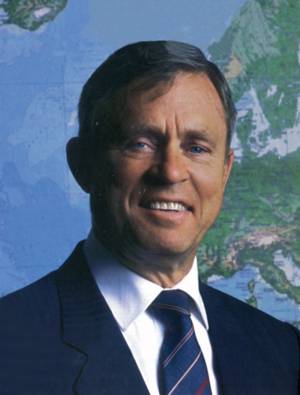 WEA Global Ambassador Brian Stiller, who at the time of Howard’s tenure with the WEA served as the President of the Evangelical Fellowship of Canada, wrote about Howard’s willingness to accept the role as International Director, “One can see the Spirit’s leading in bringing David Howard into this role. He was exactly what was needed. He had a stellar reputation. He understood the mission mind. He was uncommonly humble and collegial in working with people of other cultures. He understood the global community and was extremely skilled at inviting others into the enterprise.”

Bill Taylor, who served with the WEA Mission Commission for 30 years, reflected on how his life has been impacted by Howard’s leadership, “For 54 years Dave served as my friend and mentor. He opened up the world to me, especially in 1987, to take up the small pieces of the Mission Commission. His leadership style and values deeply shaped mine (and very close to my own father’s style): collegial, deep respect, un afraid of younger gifted leaders, sensitive to cultural values and their impact on WEA. His leadership of WEA came at a critical time and he brought integrity and recognition. His move to Singapore cannot be underestimated. My 30 years in WEA happened because Dave truly saw me and believed I could do those jobs. A giant cedar of Lebanon has fallen. But Dave dedicated his life to raising up a grove of young trees that would in time become giant oaks. They in turn would serve the eternal missional Trinity in global ministry.”

WEA Secretary General Bishop Dr. Thomas Schirrmacher said about Howard, “that a major leader from the Lausanne Movement like David Howard insisted, that it is not enough to collaborate together for world evangelism, but that we need the unity of evangelical churches around the world to back evangelism and to nurture the churches developing from evangelism, kept the idea of a global Evangelical Alliance alive. Once International Director of WEA, he also worked hard to make visible and practically reflect in the organization that the majority of Evangelicals lived in the Global South. At a time when Western Evangelicals have become a kind of minority within the evangelical family, I have built on his wisdom and his willingness to push for change. The WEA will always remember that God put the right person in place for an entire decade, from 1982 to 1992.”

David Morris Howard was born in Philadelphia to Philip E. Howard, Jr. and Katharine Gillingham Howard on January 28. 1928. He was the third of six children, all of whom ended up in Christian ministry as missionaries, pastors, or teachers. His father was the editor of The Sunday School Times in Philadelphia, and Dave spent most of his childhood in Moorestown, New Jersey, not far from Philadelphia. He responded to the Gospel call at age ten under the preaching of Rev. Erwin Moon, giving his life to Christ on April 28, 1938, a date he referred to as the most important date of his life.

Dave attended Wheaton College (Illinois), majoring in Bible and Theology, and graduated with the renowned Class of ’49. He met Phyllis Gibson at Wheaton, and they dated off and on, but were not engaged until September 1949. They were married in Wheaton on July 1, 1950. Dave then completed a Master’s degree in New Testament at Wheaton under Dr. Merrill Tenney in 1952.

Dave and Phyllis served in San Jose, Costa Rica, under the Latin America Mission from 1953 to 1957. After language school, Dave taught at the mission’s Seminario Biblico Latinoamericano and eventually was named as an Assistant General Director of the mission. In 1958, Dave was asked to direct the mission’s work in northern Colombia, so they moved to Cartagena, Colombia, where they served until 1967.

Dave and Phyllis moved to Wheaton, Illinois, where Dave served as Missions Director of InterVarsity Christian Fellowship, 1968–78, first in Chicago and then in Madison, Wisconsin, during which time he also directed IVCF’s triennial Urbana Missionary Convention (1973, 1976). Following this, Dave was asked to direct the Lausanne Congress’ Consultation on World Evangelization in Pattaya, Thailand (1978–81). Dave then served as the General Secretary of the World Evangelical Fellowship in 1982–92, during which time he moved its headquarters to Singapore, where he and Phyllis lived for five years. After a semi-retirement in 1992–95 in Illinois, they moved to South Florida, where Dave served as President of the Latin America Mission for a time and kept up a ministry of teaching, preaching, and writing.

Dave was awarded Wheaton College’s Distinguished Alumnus of the Year award in 1977 and also received honorary doctorates from Geneva College and Taylor University. Hew as the author of ten books, mostly on mission topics.

In June 2003, Dave and Phyllis moved into the Shell Point Retirement Community, where Phyllis passed away peacefully three months later. In August 2005, he and Janet King Kuhns were married, and she has been a great gift to him these past 16+ years together at Shell Point. 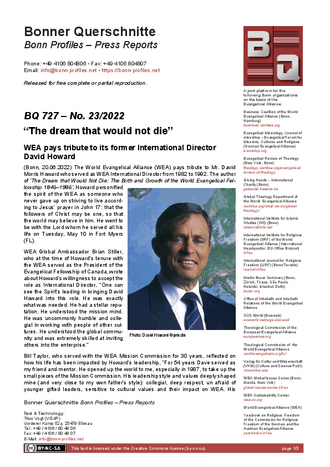