(Bonn, 03.06.2022) World Evangelical Alliance (WEA) Secretary General Bishop Dr. Thomas Schirrmacher led a delegation of WEA leaders in a recent meeting with United Nations (UN) Secretary General Mr. António Guterres at the UN headquarters in New York. They discussed some of the ongoing and newly emerging crises in the world, including the war in Ukraine and the ensuing refugee crisis, issues surrounding freedom of religion and belief as well as the environment. 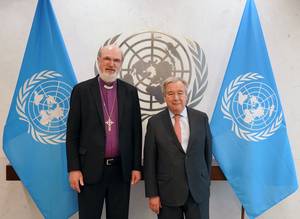 Guterres thanked the WEA for its long-term engagement in a wide area of topics and fields and shared that he had gotten to know the WEA more during his tenure as UN High Commissioner for Refugees. As a person of faith himself, he urged the WEA to increase its engagement and encourage other like-minded faith actors to join the collaborative efforts at grassroots.

Schirrmacher applauded the UN for elevating the cooperation with faith-based organizations in various branches and entities. He highlighted the UN Environment Program (UNEP) as the first branch that did not subsume religions under “non-state actors” but included them as important partners in identifying and implementing global solutions.

“The hundreds of millions of Christians belonging to the many national Evangelical Alliances around the world are not always “easy-going” actors when it comes to collaboration with others, as they are highly critical of issues such as corruption, racism, economic inequalities, or the suppression of freedom of religion or belief,” Schirrmacher noted. But he also emphasized that “they are not critical simply for the sake of criticizing. Instead, they seek to cooperate and engage meaningfully for a peaceful, just, and livable world, which is in accordance with the will of Jesus Christ.”

He added that they are aware that global issues require engagement through global bodies and that the UN has opened many doors for faith-based organizations to participate and contribute.

The meeting was the first in-person encounter between the two Secretaries General since Schirrmacher’s appointment just over a year ago. The delegation also included Mr. John Girgis, Permanent Representative to the UN in New York, Matthias Boehning, Director of WEA’s Sustainability Center at the UN in Bonn, and Rev. Dr. Rebecca Goropevsek, Coordinator of WEA’s Children Network.

The WEA has held special consultative status with the UN’s Economic and Social Council (ECOSOC) since 1997 and has continuously increased its engagement with various UN bodies, opening offices in New York, Geneva and Bonn. Earlier this year, the WEA opened an additional office at the Church Center opposite of the UN headquarters and added Richard Kirenga from Rwanda as staff who helps coordinate events and meetings in New York.

In his conversation with Mr. Guterres, Schirrmacher also promised to further level up WEA’s work with the UN, with the appointment of a Permanent Representative to the UN in Nairobi planned as a next step. 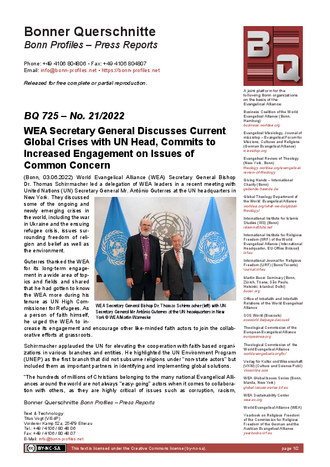