(Bonn, 11.11.2022) The World Evangelical Alliance (WEA) published a Jubilee Reprint of ‘Goodly Fellowship: A Centenary Tribute to the Life and Work of the World’s Evangelical Alliance 1846–1946’ by John W. Ewing, as the WEA celebrates its 175th anniversary. The 150-page book that is available to download as free PDF contains intriguing tales of the early years of the WEA; stories of national and international endeavors of evangelicals seeking to unite and make a difference in various countries and context; and invaluable historic photos from the middle of the 19th to the middle of the 20th century. 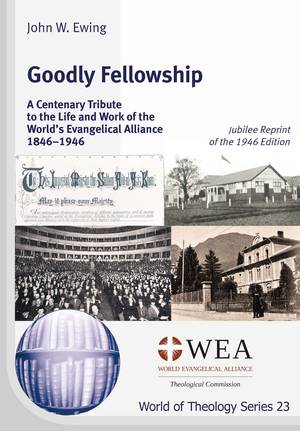 In his Introductory Note, long-time member of the WEA International Council John Langlois describes the beginnings of the WEA:

“In August 1846, in central London 4,000 people attended that momentous event, with 15,000 unable to gain admittance. […] It was then and there that 800 evangelical leaders from eleven countries representing fifty-two Christian denominations resolved to establish the WEA. They described it as a new thing in Church history—a definite organization for the expression of unity amongst Christian individuals belonging to different churches. Building on the momentum of the Great Awakenings and with a desire to respond to some of the grave social issues in society, they came together from all backgrounds of evangelicalism at that time.

The past 175 years have proved to be momentous in many ways. Dr. J. W. Ewing’s history of the first hundred years gives a vivid account of the enthusiasm and innovation of our predecessors, which was reflected in society generally, with the introduction of railways, steam powered ships and underwater telephone cables, transforming the world into a global village. For evangelical Christians it meant taking the good news of the Gospel to the ends of the Earth.

I hope you are as fascinated as I was when I read Dr. Ewing’s account of our illustrious predecessors in the pages which follow. Today we stand on the shoulders of giants as we seek to further the Kingdom of God in our own very different generation.”

Referencing the 175th anniversary press release, Bishop Dr. Thomas Schirrmacher, Secretary General of the WEA, is quoted in the book as saying:

“The WEA continues to be a testimony for the fact that amid the incredible diversity, evangelicals be united together as one. In 1846, the churches came from the whole spectrum of the Protestant faith: from Reformation times, such as Anglicans, Lutherans, Reformed and Anabaptists; from the following centuries, such as Baptists, Methodists and later the Salvation Army; and today it also includes many newer churches formed in the 20th century, such as Pentecostals, Charismatics and Independents.

Also considering the fact that each national Evangelical Alliance and each regional Alliance has its own unique history, and that evangelicals come from hundreds of ethnic groups and speak around 1,000 languages, the WEA is as colorful as never before. And this is something we would like to recognize through this Jubilee.

From the beginning, the WEA was established to foster unity with a purpose and mission. It has promoted the annual week of prayer for unity that is still observed in several countries to this day; it has encouraged the sharing of the Gospel of Jesus Christ; it has advocated for religious freedom for people of all faith—which made the WEA the first global faith body to do so; and it has responded to social issues, such as slavery and child labor. 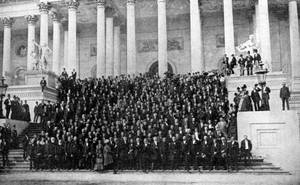 Since then, the WEA has grown to a truly global organization with national Evangelical Alliances established in more than 143 countries on all continents. The WEA has now become the second largest world Church body that speaks as a representative voice on behalf of evangelicals at the United Nations, to governments and media, contributing an evangelical perspective on issues that are relevant to the Church globally. And it remains engaged in many of the same areas, including prayer, mission and a range of human rights and social justice issues, all based on the foundation in Scripture.

As a global network that has its roots in the local churches in the neighborhoods, we continue to hold on to the central role of Jesus Christ as our personal savior, the Bible as our supreme constitution and the goal to transform the world by preaching and practicing the ‘evangel’, the gospel.” 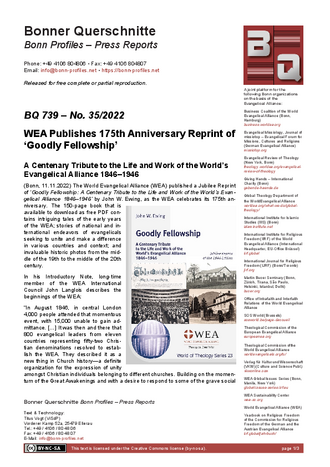