“Where Freedom of Religion Is Violated, All Other Human Rights Suffer”

(Bonn, 21.10.2022) A delegation of the World Evangelical Alliance (WEA) and representatives of its constituency from the United Kingdom, Kenya and Sri Lanka participated in the recent International Ministerial Conference on Freedom of Religion or Belief 2022. The human rights conference hosted by the UK government in London brought together governments, parliamentarians, faith and belief representatives, and civil society from more than 100 countries to urge increased global action on freedom of religion or belief (FoRB) for everyone. 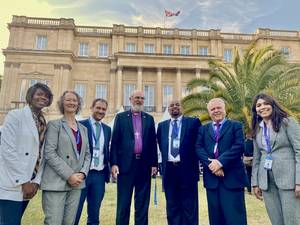 “We are grateful to the UK government for hosting this Ministerial to highlight persecution of people simply on the basis of their faith. For many years, the WEA has advocated for the rights of everyone to freely practice their faith. We continue to urge governments to ensure that everyone can believe, worship, and live in accordance with their religious beliefs,” said Bishop Dr Thomas Schirrmacher, Secretary General of the WEA.

WEA Advocacy Director Dr Janet Epp Buckingham commented that “the event included a who’s who of experts and advocates at the center of activism on religious freedom. When all these advocates get together in one place, it facilitates collaboration that can actually make a difference to people on the ground. There is so much to be done to advance freedom of religion around the world. It is daunting. But events like the Ministerial are steps in the right direction. We call on the governments who made pledges to uphold and support freedom of religion or belief to fulfill their commitments.”

Echoing these comments, WEA Ambassador for Religious Freedom Godfrey Yogarajah added, “I have no doubt that the Ministerial helped create a heightened global consciousness on FoRB, a cornerstone of all human rights. Where FoRB is violated, all other human rights suffer. So it is noteworthy that the Ministerial was unequivocal in its emphasis that both civil society and governments should urgently work towards the protection and promotion of FoRB in their communities.”

Yamini Ravindran, Associate Secretary General of the National Christian Evangelical Alliance in Sri Lanka, spoke at the Ministerial on religious freedom in her region of the world. “Drawing on my experience in South Asia, I was privileged to address the Ministerial on legal challenges to FoRB, gendered dimensions to FoRB violations and emerging FoRB trends in the region,” she said, and added, “As an advocate for FoRB, I believe the Ministerial presented an opportunity to draw global attention to the various challenges concerning FoRB in the region. One distinct highlight was the opportunity I received at the Ministerial to underscore the importance on the part of governments and civil society to engage in efforts to build social literacy on FoRB in contexts where FoRB is under threat.”

Speaking on behalf of the Evangelical Alliance in the UK that coordinated the participation of the WEA and national Evangelical Alliances, Director of Advocacy Danny Webster said, “Religious freedom must be a central plank of all governments’ domestic and diplomatic policies, and the conference in London profiled just why this is so essential. Societies that support freedom of religion or belief for all are stronger and healthier, and it is a foundational right that fosters other human rights and promotion of democracy. It was incredible to see so many countries, faiths and civil society leaders passionately advocating for freedom for all. But the conference must only be the start, words can only ever mean so much until they are backed up by substantial action and long-term commitment. It is vital that the work of governments across the world place religious freedom at the heart of trade agreements, development assistance and international diplomacy, otherwise the suffering of those persecuted because of their beliefs will continue to be overlooked.” 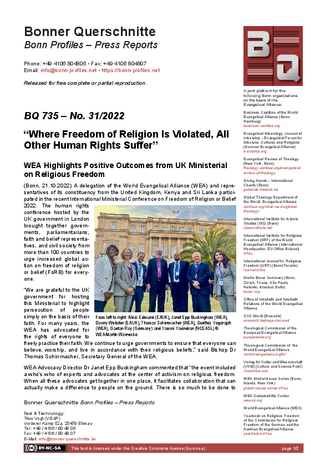