(Bonn, 20.10.2022) The upcoming International Day of Prayer for the Persecuted Church (IDOP) on November 6 and 13 presents an opportunity to highlight the clear trend of worsening religious freedom around the world. At a side event during the International Ministerial on Freedom of Religion or Belief earlier this year, Christian converts from Islam spoke about the real-life consequences of apostasy and blasphemy laws that are in force in many countries. 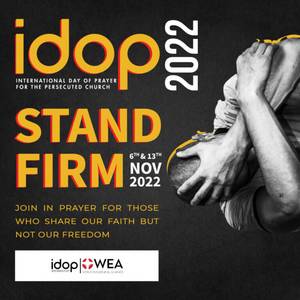 The event and a related exhibition, called “No Penalty for Apostasy” and organized by the advocacy organization Set My People Free, featured high-profile speakers including Ahmed Shaheed, UN Special Rapporteur on Freedom of Religion or Belief, and World Evangelical Alliance (WEA) Secretary General Bishop Dr. Thomas Schirrmacher. They and others described how apostasy and blasphemy laws infringe upon individual freedoms and are used to target former Muslims in particular.

Article 18 of the UN’s Universal Declaration of Human Rights calls for guaranteeing all people’s freedom of thought, conscience and religion, including the right to change a religion or belief. However, as Set My People Free founder Kamal Fahmi explained, 24 countries currently criminalize and/or uphold death sentences for people who renounce Islam.

“1.3 billion Muslims do not have the freedom to leave Islam,” Fahmi stated. “This exhibition provides a glimpse of the atrocities committed under these laws both around the world and on our very doorstep.”

Dr. Paul Marshall, Wilson Distinguished Professor of Religious Freedom at Baylor University and a senior advisor to WEA, cited a Pew Research Center report finding that as of 2019, 79 of the 198 countries and territories examined (or more than 40 percent) had laws or policies banning blasphemy, defined as “speech or actions considered to be contemptuous of God or of people or objects considered sacred.”

The main effect of these laws lies not in their occasional criminal application but in the self-censorship they impose on whole societies, as people who disagree prefer to remain quiet rather than take the risk of becoming a social outcast or being threatened or even killed by mobs.

One of the personal testimonies at the event came from Iranian Christian convert Mojtaba Hosseini, who was imprisoned for joining a house church. “When they call you ‘apostate,’ maybe they don’t kill you, but they don’t see you like a human anymore, so they give this right to themselves to just treat you anyway they like,” Hosseini said.

Eventually, Hosseini left his family and fled from Iran. “The Iranian government not only put chains on my hands and my feet. By forcing me to leave Iran, they put a chain on my heart,” he stated.

In line with its commitment to seeking justice for all humanity, the WEA has advocated for religious freedom for everyone—not just for Christians—ever since its founding in 1846. “Everyone,” Schirrmacher said, “should have the right to decide on his own faith, on his own worldview, and whatever way he changes should be free to do this without being threatened by any kind of penal law, and certainly not by death.”

In contrast, the experience of Muslims who become Christians in many Islamic-majority nations indicates that “the most dangerous thing you can do at the moment is to convert from Islam to Christianity.”

The International Day of Prayer for the Persecuted Church offers an opportunity for churches to pray for and stand in solidarity with those persecuted for their faith in Jesus Christ. It was launched 25 years ago by the WEA and has since been adopted by a great number of churches and ministries, many of which hold special worship services or events on the first or second Sunday of November. 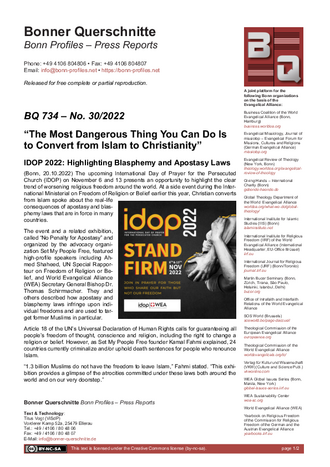