(Bonn, 15.10.2019) The newest volume of the WEA World of Theology Series offered for global discussion is the adapted English translation of the book ‘Modern Fathers’ by Thomas Schirrmacher, Associate Secretary General of WEA. The book is co-published in an US edition with Wipf & Stock, and in an European edition with Culture and Science Publ. It is also available as a pdf free of charge per download.

BQ: ‘Modern Fathers’? Were the old fathers not good enough?

Thomas Schirrmacher: It is an old myth which is not becoming any truer as it ages: Men were not made for children, because child-rearing is a woman’s thing. On the other hand, what is actually correct is the following: Fathers and children are made for each other! There is nothing which can fulfill a man more than successful fatherhood! For that reason, this book will above all have to do with the opportunities social upheaval offers fathers.

There have always been good fathers and bad fathers. But never before in history has the role of fathers been as undefined as it is today. Hardly anyone who becomes a father is entering the race with a religious, cultural, or educational assignment. This involves many drawbacks. But instead of just deploring this fact, I want committed fathers to recognize and exploit the new opportunities involved in this. Especially the freedom from old role models opens up completely new possibilities for fathers to take on a hugely positive task for the development of their children and to cultivate a stable relationship with the mother, which lives from the differentness of the sexes.

Why differentness? Isn’t it enough if the father replaces the mother at childcare from time to time?

No, fathers can only do a poor job ‘mothering’ their children. But it is equally true that even the best mothers cannot replace fathers! For a long time, research considered the father to be superfluous as an educator, especially in the early years of a child’s life. Then the call came up that the man should kindly become practically involved in the upbringing, but actually only as a duplicate of the mother. If he was not a second mother, he was considered lazy. Only recently the realization broke fresh ground: The father is different – and, with his completely different interests and ways of approach, indispensable to his children.

Can you give practical examples? 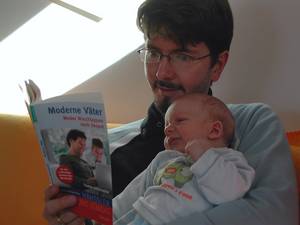 Yes, of course, anyone who watches parents but briefly can see them. Mothers are very concerned about safety and that is a good thing. Fathers tend to educate their children to take risks, and that’s a good thing too! Fathers play much more with children. In the past, this was often regarded as an escape from housework. Today we know that children learn indispensable things here, such as taking controlled risks or observing rules.

You presented the book to the public at the Czernin Palais in Prague in the presence of the Czech Minister of Social Affairs and the Family Representative of the Czech Government. Isn’t that a little unusual for a German book?

It may be so, but since the German government, be it right or left wing, is currently counting on the sellout of parental care in favour of the crèches, they would certainly not have given me such an honour. I am counting on a maximum intensive care for the children not only by the mother, but also by the father. In the Czech Republic, people burned their fingers before by experiencing crèches in communist times. This is why families with small children receive massive support in the first years of their lives, regardless of their income. Parents can use their money to visit crèches, but are not encouraged to do so and crèches cannot be subsidised directly by the state. Although the proportion of women in working employment in the Czech Republic is considerably higher than in Germany, over 90 percent of parents choose the path of self-care for the first three years of life!

Your research institute gave the opening speeches at a conference of the Czech Ministry of Social Affairs, Labour and Family on “Infant care between family and state”. How is it that two Christian ethicists are invited in such a secularized country?

My colleague Prof Dr Thomas Johnson and I have both presented for our Institute for Life and Family Sciences the scientific reasons for the priority given to childcare by their parents. In addition, we are both committed modern fathers who, despite our professional careers, give priority to the family over the economy. Christians who not only criticise, but also engage in active discussion and information are often also welcomed to be heard. 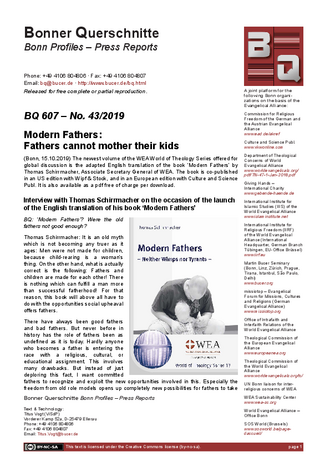