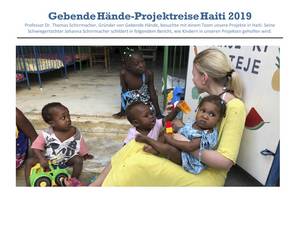 Our project trip began in Porte-au-Prince, the capital of the Caribbean island state of Haiti. In the narrow streets of the largest city in the country there was a hustle and bustle: Women offered fresh fruit and vegetables by the roadside, young people sat on the provisionally built and badly maintained sidewalks and children played with the simplest items. Already this first impression gave us a sense for the poverty that awaited us away from the big city in the middle of the country. On the first day of our trip we took a minibus from Porte-au-Prince to La Digue School. Our journey led us through the sandy streets of the rural landscape of Haiti: In the small brook along the road mothers washed laundry for their families. Others carried home jugs filled with water on their heads. Their small huts along the road were mostly wooden shacks, inhabited by large families.

Arriving at La Digue School, at the end of these narrow streets and the stream, we were grateful to find an extremely well-kept and modern educational centre, surrounded by a small banana plantation. The project partners of Giving Hands have set themselves the goal of strengthening and promoting the community around the project area. Education is the top priority: The 1,100 children are taught from kindergarten to 13th grade. The support covers vocational and everyday education such as agriculture, sewing and hygiene. 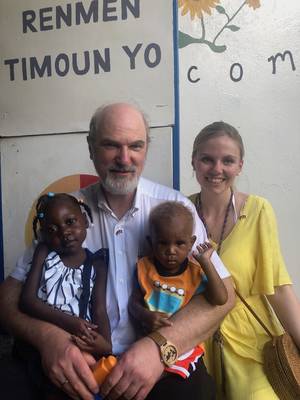 The facility, financed by Giving Hands, distributes about 2,700 meals a day to pupils and additional children from the neighbourhood. For many of the children it is the only meal of the day. We assisted in handing out meals and were rewarded with beautiful singing and joyful gratitude. During the meal we were able to sit down with the children and talk to them in French and get a first-hand impression of their positive experiences in the programme.

After dinner we were able to see for ourselves the other pillars of the community: a solar powered bread baking machine and a brick making machine that helped build virtually all the buildings on the site (Giving Hands Donation), a small Christian church where worship services are held daily, and medical care that can treat about 40 patients daily. One project worker told us that some sick people travel 14 hours on foot to be treated because medical care is so scarce.

On the way back across the sandy road we stopped once more and were grateful that by way of education the children in this project may expect a better life than living here by the brookside.

From there we drove on over winding mountain roads into the mountains of Haiti.  There the clinic Real Hope for Haiti was waiting for us. It is one of the very few clinics in the country and only charges a symbolic fee of $1.50 per treatment, which is waived in case of special need. So it was not surprising that we saw dozens on the way, some with small children and others on scooters, to reach the clinic after hours of travelling. 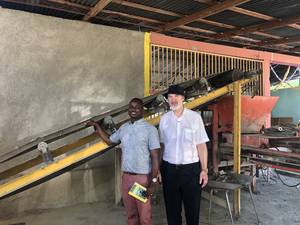 About 250 people are treated in the clinic every day. In addition to health education and preventative care, these treatments include acute care and small operations. The American doctor and her team are committed to caring for women during and after pregnancy. After all, giving birth is a major health risk for mother and child. The team hands out “birth sets” to the expectant mothers, which contain everything a newborn baby needs: Clothes, diapers, medicines, soap, blankets ...

Particularly touching were the explanations given by the daughter of the project founder, who reported on donated medicines which saved thousands of lives after the massive earthquake. A small centre for seriously ill children was set up right next to the clinic. Some children and babies stay up to 18 months until their health condition allows them to be discharged. The fates of the sick children were very close to our hearts and we would have liked to stay to give each of the little ones the attention they deserved. 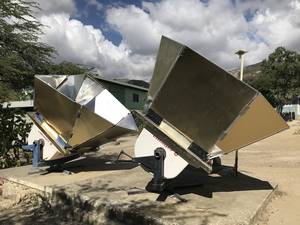 On the second day of the trip we made our way early in the morning to the Church of Bible Understanding, an orphanage for the extremely poor. The 150 or so children are cared for by teachers and nurses who give them the warmth that they would no longer feel in their own families: Most of the children have been orphaned, abandoned or dropped off by their families. The openness and joy of the children – despite their situation – was heartwarming. We sang, laughed, and played with them for a few hours. To our surprise, they liked our smartphones very much and took the funniest photos with us. So it was all the more difficult for us to leave the children behind. While walking, a little girl, Étienne, did not want to be set down from my arm any more and asked me in French if I would like to take her back to my home country. I will certainly not forget this dear face and the gingerly asked question.

From the children’s home we made our way to another project of Giving Hands. There we entered the Father Jeri School, an impressive school with 351 pupils from kindergarten to vocational training. The children and teenagers were polite and very well dressed in their school uniforms. Here we quickly realized: The help has arrived in the right place and has been wonderfully used. Our fellow travelers from partner organizations prepared some gifts for the children in advance, and so we played with the highly coveted balls in the schoolyard before lunch. 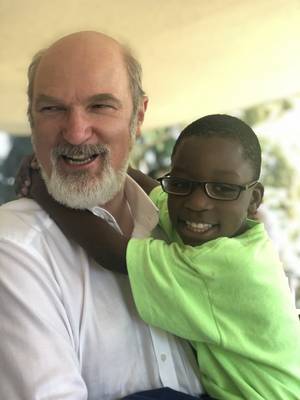 The “Food Program”, realized with the help of Giving Hands, enables the students and 1,000 other persons living near the school to have a full meal a day. To this end, special kitchens have been set up in which the villagers can take part in cooking and thus gain a certain degree of independence.

Our last visit took us to an orphanage in a suburb of Porte-au-Prince. There we met children and teenagers who spent most of their lives in this orphanage. They were very cordial and visibly happy about our visit. Together with the team we prepared a traditional banana soup and distributed it to the orphans. While we were eating we had a chat with the young people and gained an insight into what it must be like to find refuge and security in a new community without a family. Their optimism and enjoyment of life touched us.

The impressions we first gathered in the city centre of Porte-au-Prince were confirmed on our journey.

But we were overwhelmed how bravely the children accept their situation and believe in a better life through the projects. They gave us a lot of confidence and even more motivation to campaign for their future. 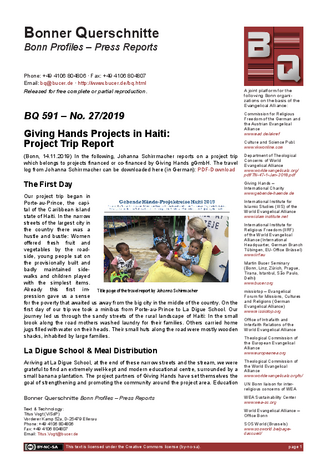 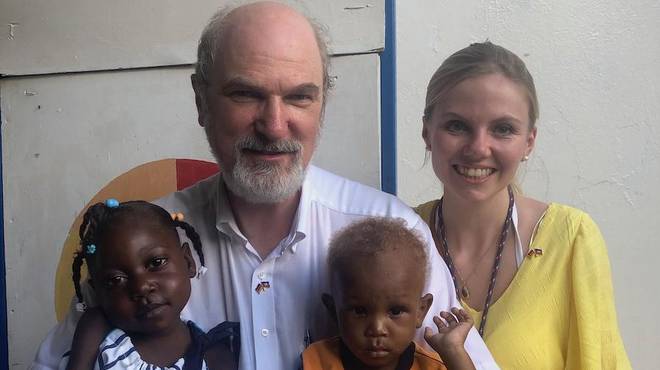 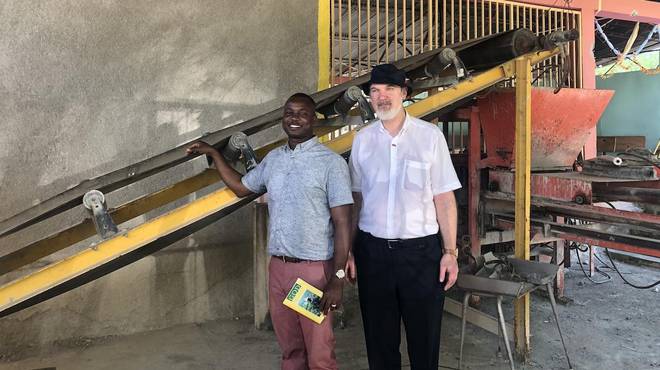 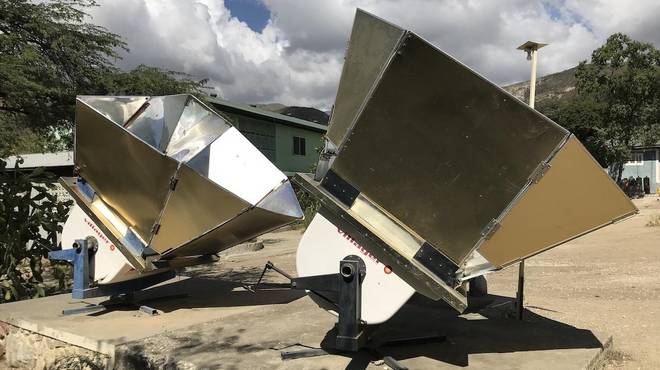 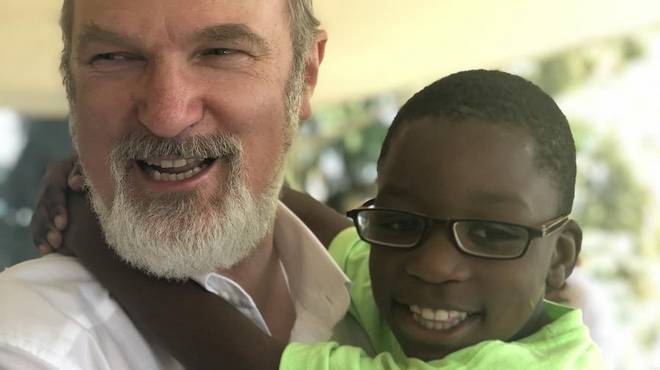