The assassins deceived the victims in order to gain their trust.

(Bonn, 27.04.2007) MBS Dean for International Programs, Titus Vogt, led an investigation into the tragic events of April 18, 2007 by means of putting together the statements from all the witnesses. MBS remains close to the victims, survivors, and witnesses to the brutal murder in Malatya through its Turkish branch, as one of the victims, Necati Aydin, was their student. Until now, MBS has hesitated to give all the details to the public, but MBS President Thomas Schirrmacher has concluded now that nothing stands in the way of a full public statement of all the details.

The murderers spent months surreptitiously gaining the trust of the victims. Some months ago the murderers gained the trust of their intended victims. To do this, the assassins indicated an interest in the Christian faith and said they wanted more information about the Bible and its contents. What deception could be more powerful to Bible publishers who were themselves adult converts from Islam to Christianity? Under this guise, they met repeatedly with their future victims. Clearly the attack was planned very long in advance.

On the morning of April 18, two of the murderers came to the office of Zirve Publishing House in Malatya, which is an extension of a Protestant publisher based in Istanbul, with distribution offices in various Turkish cities. Among other things, they discussed the Christian faith with Necati Aydin, as they had done frequently in the previous months. On this particular morning, in addition to Tilmann Geske, the bookkeeper, Emin M., was also in the office. Everything seemed to be completely normal. In the course of the morning, M. left the office, not suspecting that he would never see Aydin and Geske alive again.

Shortly thereafter the three other assassins arrived and tied up the first two victims, while they threatened them with pistols. Two days before, the assassins had been taken into custody because of wielding weapons in public, but they had been set free because they were only carrying warning pistols.

As soon as the victims were tied up, the murderers began stabbing them with knives all over their bodies. A short time later Ugur Yüksel came into the office; he was immediately grabbed by the murderers and tied up. Right after that Gökhan H., also a Christian, stopped by the Zirve office, but he could not open the door, because it was locked from inside and the lock was jammed. H. tried to call the office and finally reached Ugur on the telephone. Ugur said that the planned meeting was not going to be held in the Zirve office; it would instead be held in a particular hotel. H. had the impression that something was wrong, so he called a friend in the city. This friend advised him to call the police, which Gökham H. did.

When the police arrived a few minutes later, the victims were still alive. The police demanded that the criminals open the door, at which they slit the throats of the victims. When the police forced the door and stormed the office, they found Aydin and Geske already dead. Yüksel was still alive and was rushed to a local hospital. In spite of emergency surgery and 51 units of blood, he died of his numerous and massive knife wounds.

According to the Turkish press, the autopsy reports give the following picture: The bodies were covered with about 156 knife wounds in the pelvis area, lower body, anus, abdomen, and back. Their fingertips had been sliced repeatedly; and they had massive slashes on their necks which severed the windpipe and esophagus.

The distinctively ritual manner of the murder, particularly the slicing of fingertips, is convincing observers of the consciously religious motivation of the assassins. The perpetrators seem to have been following the instructions of Sure 8:12, from the Koran. There it says (in the Rudi Paret German translation of the Koran), “I will strike terror into the hearts of unbelievers. Flay their necks (with a sword) and strike every finger.” The last half of the sentence is translated in even more striking terms in some versions. In the Rassoul and Zaidan translation it says, “chop off every finger;” the Azhar and Ahmadeyya translation says, “chop off every finger tip.”

Three of the attackers were arrested directly in the office, where the attack was occurring; two tried to escape by climbing down an external downspout pipe. One more attacker was arrested in the second floor of the building, one floor below the crime scene. The final assassin, who is described by the others as the leader of the group, fell to the street from a significant height when the downspout pipe broke off from the wall of the building. He was brought to a hospital and spent some days in a coma, but he is now awake and is being questioned by police.

In the course of the next few days, some other suspects were taken into custody, including the son of a mayor (AKP party) from a town near to Malatya.

The first Turkish martyrs since 1923.

At a press conference a day after the attack, Pastor Ihsan Özbek (from Ankara), President of the Association of Protestant Churches in Turkey, said “Yesterday Turkey was buried in the darkness of the Middle East.” He compared the common, country-wide, widely hawked conspiracy theories which accuse Christians of conspiring against Muslims with the medieval witch hunts in Europe. These conspiracy theories contain a deep phobia of foreign missionaries. In responding to an inquiry of why Geske, a foreign missionary, was in Malatya, Özbek said this is already an unconscionable question, since in a truly democratic state one may not ask “why are you or they in Malatya?” The pastor used very pointed words to portray the background of the murders which led the Turkish media to entitle a report on the news conference, “A gruesome brutality, but no surprise.” Özbek said he was convinced that, “it is not the last martyrdom, though we hope from the bottom of our hearts that it could be the last martyrdom.”

Necati Aydin and Ugur Yuksel are the first known Muslim converts to Christianity to be martyred, since the founding of the Turkish Republic in 1923. Ugur Yuksel was buried according to Islamic/Alevitic rituals at the orders of his family which vehemently denies his Christian faith. The German victim was buried on April 20 in the Armenian cemetery in Malatya, following the wishes of his widow. This occurred after a bitter fight with the local authorities who unconditionally wanted to prevent Geske’s burial in their city. Because of pressure applied by the German government, his burial was only delayed by three hours, from 2:00 p.m. until 5:00 p.m. Eye witnesses say that about 100 mourners from across Turkey came to his funeral. Necati Aydin, who was pastor of the local Protestant church in addition to his work in the Zirve Publishing House, was laid to rest on Saturday, April 21, in his home town of Izmir. The roughly 500 mourners who attended his funeral were very deeply moved.

The media storm in Turkey.

There has been an enormous media storm in Turkey following these events. Many Turks sent letters to the newspapers to express their deep disgust. The widow, Susanne Geske, earned tremendous admiration for her words in a TV interview the day after the massacre. She said she forgave the murderers of her husband, the way Christ forgave his murderers, citing Jesus’ prayer, “Father, forgive them, for they do not know what they are doing.” This is the reason why she wants to stay in Malatya with her children. Many letters to the newspapers are saying that now they really want to read the New Testament or even to describe themselves as Christians, since they no longer want to have anything to do with Islam.

This brutal attack is not really the act of a group of deluded youth, since the media has been provoking antagonism against Christians for a long time. One of the most harmless media lies is that Christian are paying Muslims to convert to Christianity; one of the more disturbing is that Christians offer prostitutes to Muslims, in order to entice them to become Christians. Two events related to the funeral of Necati Aydin serve to illustrate the deep ambivalence of Turkish society toward Christians. When his coffin was to be flown from Malatya to Izmir, it would not fit into the x-ray machine in airport security. The Turkish newspapers reported that the airport security staff simply broke the handles off the coffin, a sign of their feelings. And during his funeral, one of the police officers standing guard over the funeral called one of the mourners “a son of a whore.”

Last Sunday (April 22, 2007) the services of many Protestant churches took place under heavy police guard. In one small congregation in one of the parts of Istanbul, two top local police officials came to enquire about their security needs and to urgently suggest the installation of an alarm system and security cameras. And because of the continuing massive threats, many pastors are now accompanied by security guards. This causes great concern for believers in Turkey. In spite of truly positive developments in the realm of freedom of religion in recent years, they now see their freedom of religion as deeply threatened.

This report was compiled by Titus Vogt, MBS Dean of International Programs. The English translation was done by Thomas K. Johnson, Ph.D., MBS Professor of Apologetics and Ethics and Fellow of the International Institute for Christian Studies. Released for free complete or partial reproduction 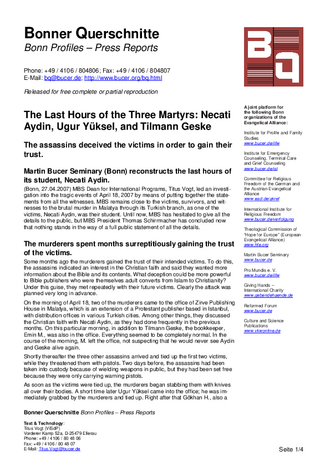